As it pours rain outside my window here in Vancouver, I am starting to wonder if we are ever going to get a proper summer. Obviously I am not going anywhere tropical this summer, so I decided I could at least pretend while I sat on my couch and gobbled down some ice cream on this gloomy day. I added rum to my version, but you could easily make it virgin. However I have found the rum helps it soften a bit from the pineapple juice. I recommend pairing this weeks recipe with a barbecued rib dinner.

In a blender create the base by combining the milk, pineapple, rum, and sugar. Blend until the pineapple is smooth.

Remove from blender and stir in the heavy cream and coconut cream.

Add the base to your ice cream maker and churn to the manufactures instructions.

November in Vancouver has me dreaming about summer. Not only is it cold and wet, but now that the time has changed, it feels like it is always dark. I made this recipe so that I could pretend that I was sitting on a beach in Honolulu sipping on a drink in a coconut rather than my desk at work. I would recommend pairing this ice cream with some fresh fruit and a white wine.

Slice the mango and place it in the blender with the whole milk. Blend until smooth. Once fully blended, combine in separate bowl with the heavy cream, milk, coconut milk, and sugar. Whisk until the sugar has dissolved Store in the fridge overnight to fully cool.

The next morning, pour the base into your ice cream maker and churn to the manufactures instructions. 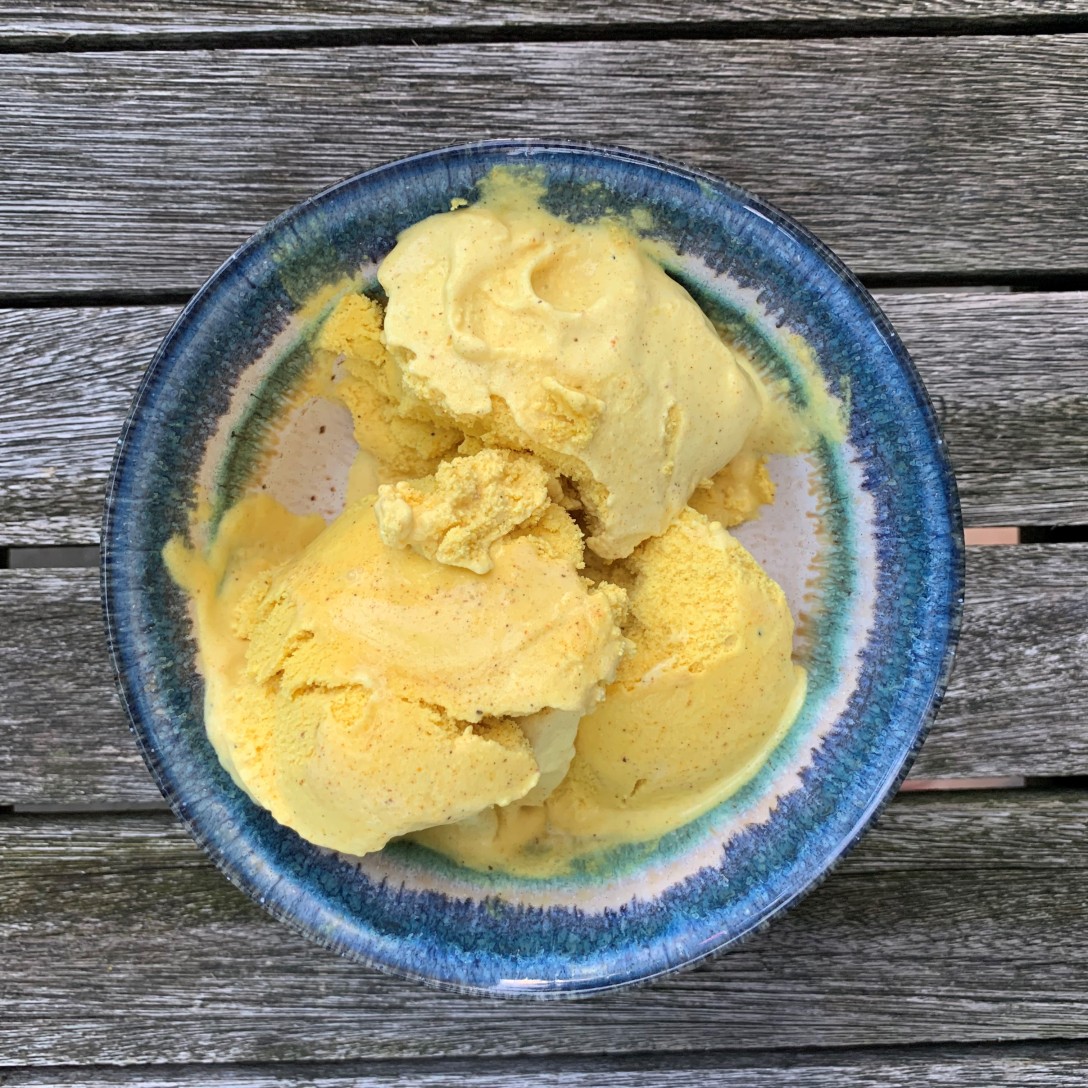 I’ve become a bit addicted to golden milk lattes, the perfect alternative when it is too late in the afternoon for a cup of coffee. It truly warms you up on a gloomy, rainy Vancouver day. I could only assume that a golden milk latte would translate easily to ice cream since it is made with generally the same base. However, when I make mine in the afternoons, I only use almond milk, but I did decide to substitute in a bit of coconut milk to this recipe to give it some added creaminess. After trying this recipe, I think I hit it pretty spot on in a latte to ice cream match up. My husband would concur after gobbling most it up in one sitting.  I would recommend pairing this treat with a rainy day, and  maybe some bourbon.

Shuck the corn and cut the kernels off of two ears. Add the corn kernels along with the rest of the base ingredients to a sauce pan. Warm the mixture on low heat and stir. Turn off the heat just before it simmers.  Do not boil. Transfer the mixture to a blender and blend until smooth. If you do not have a high powered blender, you may want to strain some of the corn through a strainer to get rid of the pieces. Transfer the mixture to a heatproof container and store in the fridge overnight to fully cool.

While you are stirring the base, take the remaining ears of corn and set it on a sheet of tin foil. Rub it in olive oil. Sprinkle chili powder on the kernals ( amount depends on how spicy you want it,). Zest the lime and add the zest to the corn along with the juice. Wrap the corn and barbecue for 20-30 minutes. Once the corn has cooled enough, take a knife and cut off the kernels. Cool and store in the fridge until fully cooled.

Once the elite and base have fully cooled, add the base to your ice cream maker and churn to the manufactures instructions. Slowly add in the elote and continue to churn until the ice cream has fully formed. 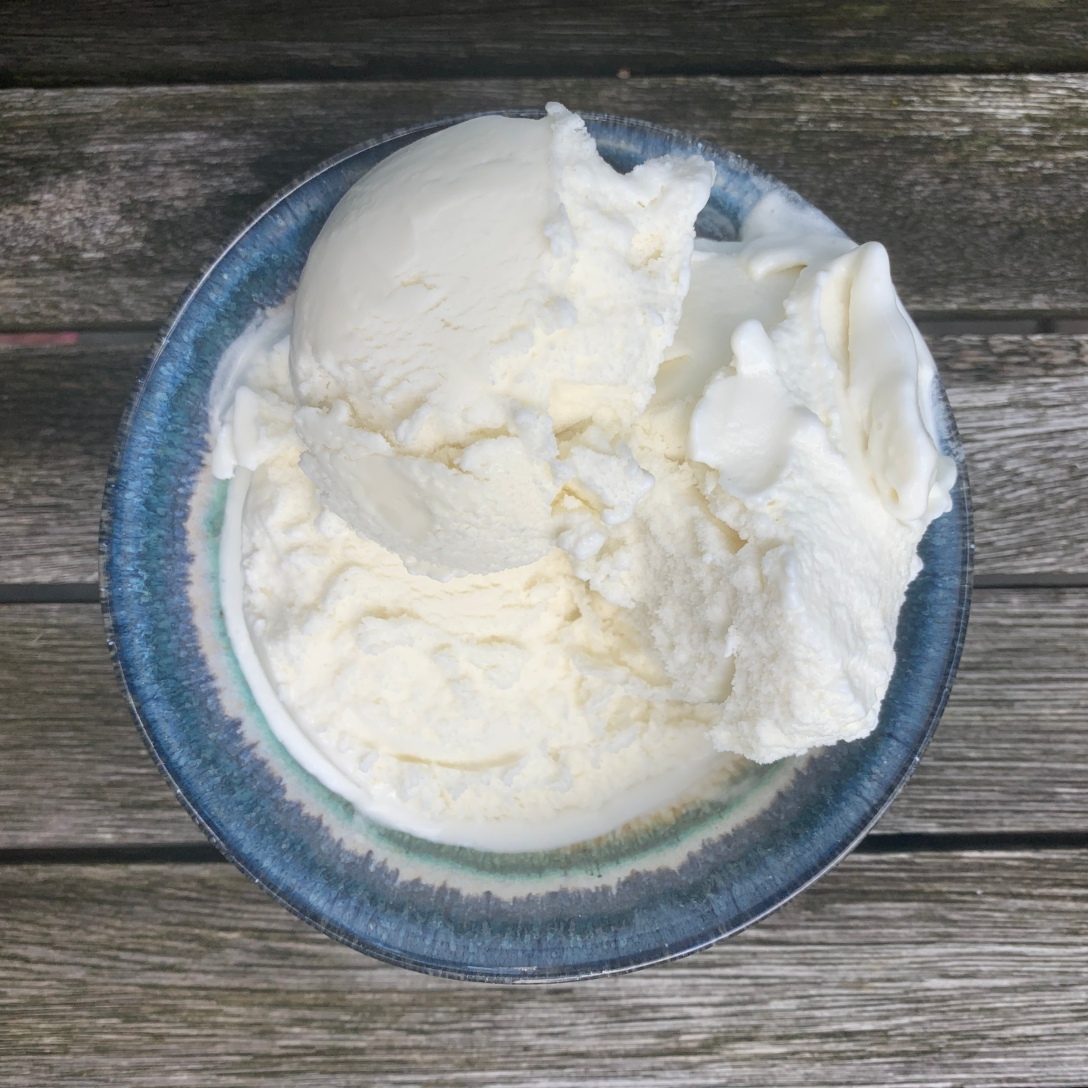 One of my coworkers mentioned that she had an abundance of Thai basil in her garden. I immediately jumped at the chance to try it out in an ice cream. I tried growing Thai basil this year in my herb garden and failed miserably, so I was thrilled to have someone willing to share. At her suggestion, I also added some lemon zest to this recipe and I think she was right, it compliments the basil well. Instead of doing a full dairy base, I continued with the Thai theme and subbed part of my base for coconut milk. I imagine myself eating this ice cream sitting on a beach and sipping a mai tai.

Flavor
Handful of Thai basil
Zest from one lemon

In a sauce pan create the base by combining the heavy cream, milk, coconut milk, and sugar. Zest the lemon into the sauce pan. Warm the mixture on low heat and add in the basil just before it boils.  Do not boil. Store in the fridge overnight to fully cool.

The next morning, strain the zest and basil into a separate bowl. Do not strain directly into your ice cream maker if you have a chilled one. I learned this the hard way. The coconut milk with immediately freeze to the side of the bowl and you will have to scrap it out. Once strained into a separate bowl, turn on your ice cream maker and slowly add in the base. Churn to the manufactures instructions.